This country is called in many different ways – Belorussiya, Belorus, White Rus'. However, the correct name of it is Belarus.

This land gave birth to many outstanding people such as Vseslav of Polotsk, known as Vseslav the Sorcerer, Tadeusz Kościuszko, Marc Chagall, Isaac Asimov, Shimon Peres, and even world-famous American television host Larry King comes from Belarus. Although it occupies a small territory in the center of Europe, Belarus has always been rich in intelligent and gifted people who loved and still love their Motherland, even being far away from it. We really hope that this web-site will encourage many people around the world to visit Belarus, get to know it better and fall in deep love with it. No quarantine. Belarus did not close the borders for the entry of foreign citizens into its territory. The hotels and sanatoriums of Belarus have opened the tourist season. 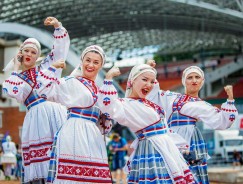 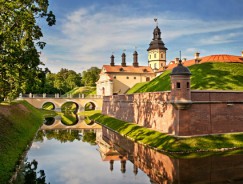 The Nesvizh palace-and-park complex (built in the 16-18th centuries) is an outstanding monument of architecture, which was built by the Italian architect Giovanni Maria Bernardoni with a clear intension of taking the shine out of the contemporary kings’ palaces. 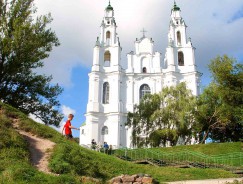 On the high bank of the Western Dvina, near the Palata river mouth, the Cathedral of Holy Sophia built of white stone, raises its towers towards the sky. Build in the mid-11th century in pursuance of Vseslav the Magician’s order and reconstructed in the 18th century in the baroque style of Belarusian trend, the cathedral has always been a symbol of power and independence. Nowadays it houses a museum and a concert hall and a solemn organ music sounds under the vaults of the ancient church.Build in the mid-11th century 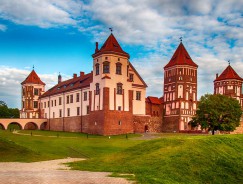 The Mir Castle – a masterpiece of Belarusian architecture – is situated near the village Mir, Korelichski district, Grodno Region. This unique monument, included in the UNESCO World Heritage List, had been built and rebuilt for many centuries (15-17th centuries) by the magnate family of Ilyinich.

Location: The Mir Castle – a masterpiece of Belarusian architecture – is situated near the village Mir, Korelichski district, Grodno Region